You can now pick up bikes locked outside the stations 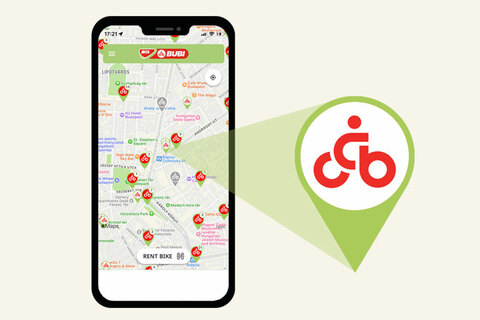 When the new generation of MOL Bubi bicycles was launched, we received a number of comments about the lack of bicycles at the stations. Bicycles left scattered around the city not only caused problems from a user and townscape point of view, but also made operational tasks more difficult. As a solution, we have introduced a service fee of 5,000 HUF, which is charged when users lock their bikes outside the stations.

Although we recognise that the service fee has an incentive effect, there are still some bicycles that are locked off station, contrary to the conditions of use. Until now, these Bubi bikes have not been visible in the app, so even if users could pick up these bikes, they could easily have been missed.

From now on, a new pictogram in the MOL Bubi app will indicate bikes locked outside of stations, making it easier to get the abandoned bikes back into circulation. You can pick up bikes marked with a white circle dot in the green marker, and the rental process is the same as picking up a bike at the station: scan the Bubi QR code using the app, or enter the serial number of the bike and you can use it after unlocking it.

It is important to stress that once you have finished using your bike, you can still lock it only at the designated MOL Bubi stations. If you do not comply with this condition, a 5,000 HUF service fee will be charged. Although the introduction of this new feature will make the work of our logistics team much easier, we may still have to collect MOL Bubi bikes that have been locked outside the service area or we may have to deal with the problem of scattered bicycles again, which is also damaging the cityscape. To prevent this, we will continue to keep the user charges as an incentive to comply with the conditions of use. You can continue to use the parking feature at locations other than stations.