MOL Bubi: new stations in District 8 and new bikes all over the city 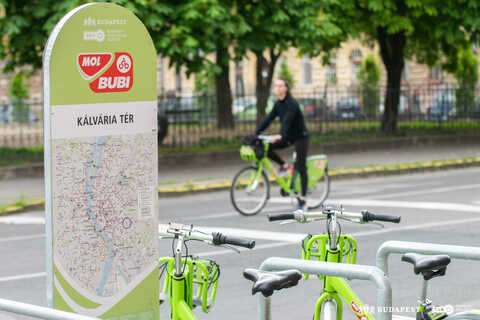 MOL Bubi's network has been expanded with new stations, and from today the public bike-sharing service can be used at five additional locations in Budapest’s District 8. The new locations were inaugurated at a joint press conference by Mayor Gergely Karácsony, Dr. Katalin Walter, CEO of BKK and András Pikó, Mayor of District 8. At the event it was also announced that the MOL Bubi public bicycle fleet will soon significantly grow in size.

On behalf of the Municipality of Budapest, under the coordination of BKK Centre for Budapest Transport and with the support of the Municipality of Józsefváros (District 8), five new-generation MOL Bubi stations were set up in the 8th district. From today, MOL Bubi bicycles can be picked up and returned to the following locations:

At the inauguration press conference, Gergely Karácsony, Mayor of Budapest, pointed out that MOL Bubi is undoubtedly a success story in the life of Budapest. According to the mayor, there is no question that the network needs to be expanded, which is why the capital launched this development in cooperation with several districts. In the first phase of the joint work, the stations were built with the support of the Józsefváros Municipality.

Since its rebirth, MOL Bubi has been breaking records one after the other - as Dr. Katalin Walter said at the press event. According to the CEO of BKK, the number of rentals reached an absolute record last September: in one day, the service was used 10,042 times by customers in the capital. The most recent data, from April 2022, also show that MOL Bubi is a popular service in the capital. Last month, the average number of rentals was over 5,700 per day, but there were also days when BKK customers rented bicycles 9,400 times.

András Pikó, the mayor of Józsefváros, expressed his pleasure that finally those districts of the city have been connected to the the MOL Bubi network, without which, in his opinion, the public bike-sharing service was not really complete.

900 new bikes will be added to the system

Last month, there was a period when 700 MOL Bubi bicycles were in use in the city at the same time, in other words, that was the number of bicycles in circulation in different parts of Budapest. The outstanding interest sent a clear message to BKK: Budapest needs not only new bike stations, but also new bicycles," said Dr. Katalin Walter.

In this context, the CEO of BKK informed the press that thanks to a successful public procurement procedure, 900 brand-new MOL Bubi bicycles will be added to the system. 350 of the new bikes will be on the streets this year. The contract for the delivery of the bicycles was signed on 29 April 2022 by BKK with Csepel Kerékpárgyártó és Forgalmazó Zrt.