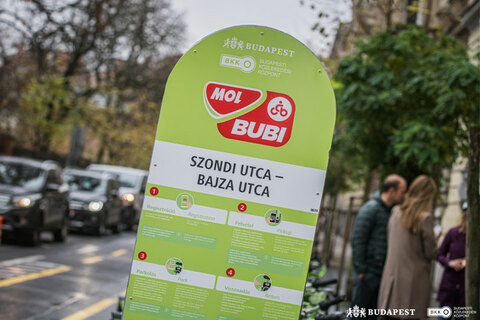 As of today, the MOL Bubi public bike-sharing service can be used at new locations: bicycles can now be picked up at stations in four locations in District 6. Meanwhile, the service has reached another milestone, with more than four million public bicycle trips already made by customers.

At a press conference held in conjunction with the opening of the new stations, Budapest Mayor Gergely Karácsony said that MOL Bubi is a real success story and the public bike system has become an integral part of the capital's transport system. He added that the climate and energy crises prove that the direction is right and the service needs to be further developed.

Dr. Katalin Walter, CEO of BKK Centre for Budapest Transport, emphasised that the MOL Bubi is an environmentally conscious, healthy and fast solution for urban transport. The CEO underlined that the recent handover marked another milestone for the system, with more than 4 million people having ridden bicycles by mid-November 2022 since the renewal in May last year. The head of BKK also indicated that stations will soon be installed at Blaha Lujza tér.

The mayor of Terézváros stressed that protecting the green environment and afforestation are just as much a part of creating a more people-centred, liveable city with cleaner air as the promotion of environmentally friendly transport. Tamás Soproni added that as the number of people using bicycles increases, the necessary storage facilities will be expanded, and at the same time, a proper place for electric scooters will be provided in the heart of Budapest.

Péter Pantl, Corporate Communications Vice President of MOL Group, said that MOL is proud to have been the title sponsor of MOL Bubi from the very beginning and thanks to its cooperation, the system had been successfully renewed a year and a half ago. MOL supports a development strategy focused on customer experience, which is the reason why today the system has been extended to another district. As a company based in Budapest, it is also important for the Company that 177 stations and 2,060 bicycles are now available in the capital to help people who prefer environmentally friendly transport. In the future, the Group will continue to support developments that can make MOL Bubi even more popular by focusing on customer needs and sustainability.

In May and June, bike stations were set up at 15 new locations in District 8 and District 11, so that after today's handover, bicycles can now be picked up and dropped off at 177 locations.

After a year and a half, MOL Bubi is still popular

Thanks to its user-friendly app, easy registration and better bikes, the public transport system has been breaking records since its relaunch in May 2021, and in mid-November this year it passed the four million riders mark. In the last summer month, the service was used more than 358,000 times, and in September, more than 16,000 green bikes were used on two days.

The data shows that customers do not only use the MOL Bubi in sunny weather: in October, more than 333,000 people chose public bicycles for their journeys, making it a key means of transport in Budapest all year round.

BKK's aim is to make the service available to as many customers as possible, serving the needs of the capital's residents, and the company has been steadily expanding the public bicycle system over the past period. This year, 500 brand new MOL Bubi bicycles were put into service, with the latest addition of 200 new bikes at the beginning of October. Today, a total of 2,060 public bikes are available to customers.

The importance of the expansion is also justified by the fact that the ridership level has been steadily increasing since the renewal of the system, and user feedback clearly puts the expansion of the bicycle fleet at the top of the list. This is closely followed by the need to make the MOL Bubi service available in as many areas as possible, which is being worked on jointly by BKK and the Budapest districts.

Before the expansion of MOL Bubi in Terézváros, BKK had already implemented bicycle-friendly improvements in the 6th district: the Bulcsú utca-Bajza utca pedestrian-cycle tunnel was renewed, and the section of Podmaniczky utca within the Grand Boulevard was made safer and more liveable.