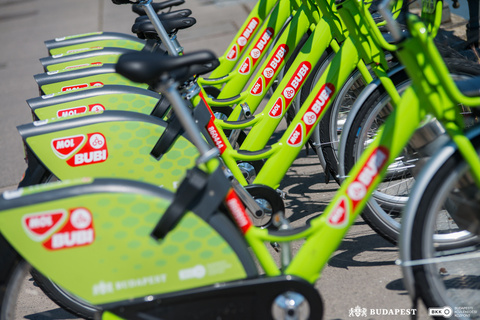 Budapest, 12 April 2022 - The installation of five new generation MOL Bubi stations started in the capital's 8th district on 11 April 2022. The new locations will replace the usual docking stations with traditional bike racks and will be equipped with micromobility points.

Most areas within the Magdolna and Orczy Quarters in District 8 (Józsefváros) have been sadly missing from the MOL Bubi network. This was not only a local gap, but also a gap in the overall MOL Bubi network. This is why, at the initiative of the Municipality of Budapest, BKK and Józsefváros Municipality have been working for a long time to create the most acutely missing network elements.

In the first phase of the joint work, the installation of five new generation MOL Bubi stations started on Monday, 11 April 2022 at the following locations, with the support of Józsefváros Municipality and coordinated by BKK:

The Municipality of Budapest provides financial support to BKK for the establishment and rapid development of the five new combined MOL Bubi stations and micromobility points. The installation work is expected to take two weeks, so that the district residents and MOL Bubi users can take possession of these points after Easter.

On the northern, even side of the section of Bródy Sándor utca between Horánszky utca and Gutenberg tér, pedestrian traffic conditions on the pavement will be improved. A total of 16 car parking spaces will be freed up, making the street more accessible, safer and more comfortable for pedestrians and for those using micromobility vehicles.

At the same time, the collection point on the Kőfaragó utca-Vas utca corner will be relocated to the Bródy Sándor utca-Horánszky utca intersection to better serve the northern part of the Palace Quarter.

The extension will significantly improve accessibility to the Palota, Losonci, Magdolna and Orczy Quarters. These neighbourhoods will also become more accessible by MOL Bubi from the wider city-centre area, and the nearer high-traffic public transport hubs (e.g. Astoria, Rákóczi tér, Kálvin tér, etc.) will be a few minutes away. The connections within the district will also be improved: the Rákóczi tér Market Hall, the Teleki tér Market, shopping centres, commercial and cultural venues will be more easily accessible from the residential areas.

Cycling-friendly developments in the capital

The cycling-friendly development of Budapest's inner-city areas was closely linked to the introduction of MOL Bubi. Complex bicycle-friendly improvements have been made to the city centre to create a service area for the Budapest public bike-sharing system, making cycling, car traffic and parking safer in the MOL Bubi service area.

BKK, seeing the high utilisation of bicycles, added 360 brand-new MOL Bubi bicycles to the capital's public-bike fleet at the end of 2021. BKK customers can currently pick up and drop off MOL Bubi bicycles at 158 locations, including important transport hubs and near public transport stops. A total of 1,560 bicycles are already available for the convenience of Budapest residents, allowing them to quickly get anywhere in the city centre in 10-15 minutes at the most, while for longer distances the service can be flexibly combined with other means of public transport.