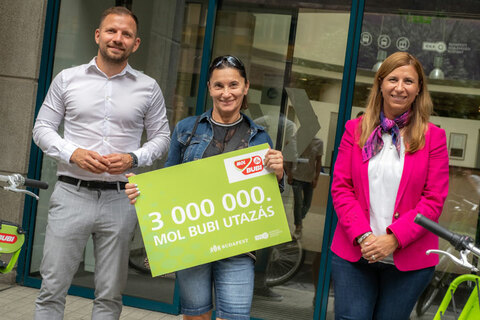 More and more people are choosing MOL Bubi: more than 3 million trips have been made on the public bike-sharing service so far. BKK Centre for Budapest Transport has greeted its customer who has taken the three millionth trip with an annual MOL Bubi pass.

In mid-August, the number of MOL Bubi bike trips exceeded 3 million. Ágnes Diószegi, BKK's Deputy CEO for Customer Relations and Sales, and Dávid Borsi, the company's Communications Manager and spokesperson, greeted the customer who initiated the three millionth journey with a gift package and an annual MOL Bubi pass.

MOL Bubi, which was renewed last May, has enjoyed unbroken popularity and is performing exceptionally well even by international standards. In the summer months behind us - June and July - there were hardly any days when fewer than 10,000 bikes were used. In many cases, more than 13,000 rides were made on MOL Bubi bikes. In fact, there were days when the number of journeys exceeded 14,000.

As popularity grows, so does the number of bikes

BKK and Csepel Zrt. have recently significantly expanded the fleet of the public bike service. The companies put 190 new bikes into service in mid-summer, bringing the total number of MOL Bubi bikes on the streets to 1,750. Prior to this, the service area of the system was also expanded, with a total of 173 stations where bikes can now be picked up and dropped off.

In addition to the expansion, the high demand for bicycles means that it is also important that users always drop off their bikes at the designated stations. Bicycles left scattered around are missing from the system, which is a problem both from a user and operational point of view and from an urban image point of view. Those who leave their bikes outside the MOL Bubi station will have to pay a 5,000 HUF off-station bike locking surcharge. The purpose of introducing the charge is not to impose fines but to prevent misuse.