Celebration with a new record of the 8th birthday of MOL Bubi, the awareness-raising public bike system 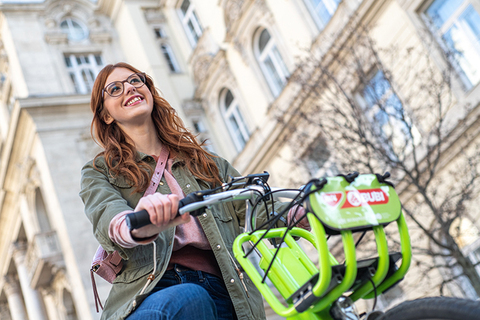 MOL Bubi, the popular public bike system of Budapest’s residents has turned eight. Due to its effect, a significant number of Budapest’s residents considers cycling a competitive transport mode, as they have recognised that bikes are environmentally friendly, economic and in certain situations cycling is the fastest transport mode. Riders getting about in Budapest took care of the birthday present: recently, during one day the green bikes were used over 16,000 times.

MOL Bubi was launched eight years ago, on 8 September 2014. In 2014, the public bike system was considered a brand new system in Hungary and became very popular in a very short time among Budapest’s citizens and visitors. As a consequence of the installation of its system, a widely-known and acknowledged brand was built on the market of shared transport services. Forbes even included it in its 2015 selection of the trendiest Hungarian brands.

After its initial success, May 2021 was a significant milestone in the operation of the bike system, when MOL Bubi was renewed. Since then MOL Bubi has been already used over 3 million times.

In the past one and a half years, MOL Bubi broke newer and newer records from time to time: in the last summer month, customers used the system over 358,000 occasions. Moreover, by the morning of its 8th birthday, the absolute record of the past nearly one decade was broken: on 7 September, MOL Bubi was used 16,171 times.

Thanks to the public bike’s likeability, favourable prices and light use, currently the service is still popular. However, MOL Bubi’s successes are not valuable only on its own merits.

MOL Bubi has raised awareness to a significant extent among Budapest’s residents. More and more people have recognised that cycling is popular, due to deliberate reasons: it is fun, economic, and in many cases - particularly in combination with the conventional public transport modes - faster than getting about by car in traffic congestions. In Budapest, as an indirect effect of the MOL Bubi public bike system, the spread of individual bike use has increased, too. In the past years, newer and newer records were reached in passenger number of urban cycling in Budapest. In August, counting devices measured record-high cycling traffic and even by MOL Bubi there was a record number of trips.

In a very short time, even public opinions about urban cycling have changed. Beliefs that were typical one decade ago were shifted with a new belief, according to which, it is normal to get about by bikes also in Budapest.

Cycling-friendly developments in the inner city parts of Budapest were tightly interconnected with the launch of the MOL Bubi public bike system. In its service area, cycling has become safer and for each and every passenger, risks of transport were mitigated. The fundamental, simple traffic engineering-related interventions made the city rideable by bikes. These interventions were

Bike-friendly developments made on MOL Bubi’s starting service area were applied on Budapest’s several areas by BKK in the following years. While streets and roads are developed, it is a general objective since the launch of the MOL Bubi system that bike-friendly criteria could be enforced in the course of refurbishment of roads, road interventions and restructuring of public spaces. The demands of pedestrians and bike riders are met, in harmony with the conventional public transport and individual car transport on high quality.

One of the objectives set in the Budapest Mobility Plan is that the rate of cycling could reach 10% by 2030, the rate of pedestrians could reach 20%, in relation to the number of trips, primarily combined with public transport. Please find information on the services and developmentsof BKK’s bikes at the company’s website.